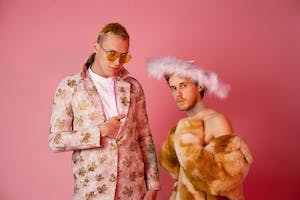 CAPYAC is a surreal dance act with as much Berlin/Detroit/French electronic influences as jazz, funk and the swirl of modern genres mixed in. Started in Austin, TX with a consortium of collaborators, the founding duo is now based in Los Angeles, CA regularly featuring guest vocalists, dance troupes, and fish mongers to elate and enlighten.

Their debut single “Speedracer” set the stage for an avant-garde aesthetic alongside chill Rhodes piano, slowed nudisco beats and funky guitars. With “Headlunge”, “Fis” and “Who is Donny Flamingo?” multi track releases, we saw the musical partners P. Sugz and Potion dabbling in minimal techno, spy-movie theme songs, trap jazz and every genre amidst the kicks and snares. With regular contributions from saxophonist Papa Mongoose, MC Rudi Devino, vocalists, nay jesters Oolaf & Bean and percussionist/daredevil The Hollywood Jingle, their live shows are infamously full of antics you’ll only see at a CAPYAC show -be it freshly griddled pancakes tossed from the ACL Fest stage, wild musical and theatrical improvisations at Capitol Hill Block Party, Twilight at the Pier and Euphoria Fest or puppeteering across California’s finest stages.

Appearing alongside CLASSIXX, Washed Out, Holy Ghost, Tennyson and more; since 2016 they have performed 250+ shows across the US, MX and throughout Europe to much acclaim and confused smiles.

Modern music declassifiers, CAPYAC are steadily releasing singles as we watch them real-time stretch and explore the far reaches of (most simply put) “electronic dance music” but more aptly described as “good music to dance to.”