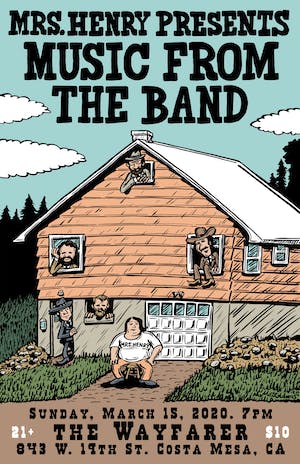 iCal
Google
Mrs. Henry Presents The Music of The Band at The Wayfarer

entirety with a wonderful community of San Diego musicians. The show

mastered by Joe Bozzi, known for his work with Last Waltz alumni Neil

Young and Joni Mitchell, and housed in a high-quality LP jacket

this incredible show on the road with Mrs. Henry Presents Music From

The Band this Spring. Shows will consist of an opening set of original

music followed by a set of music from the Band's catalog: The Basement

Tapes to Stage Fright, Music From Big Pink to The Last Waltz.